Recordings of the Australian Adobe Web Tricks of the Trade Presentations 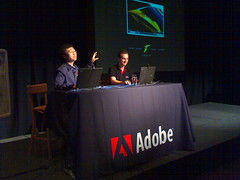 Brian Chau has been busy recording his presentation from the recent Sydney, Auckland & Brisbane Adobe Events (Melbourne was before Christmas)

Whether you were at the event and would like a refresher or missed it and are interested in the following topics, go get a coffee (or a beer!), find a comfy chair and click on the links below to open the Connect recording;

The session highlighted a couple of examples of how websites used Flash Video effectively to communicate with their customers. Two deployment mechanisms were discussed: progressive download and streaming (via Flash Media Server). That was followed by a demo as to how to build a Flash app that streaming videos from the streaming server.

The sessions started with a few Flash Lite examples for mobile devices like the Nokia Symbian S60 series and the Windows Mobile 5 phones. Followed by the demo using Flash Professional 8 with the Flash Lite 2.1 authoring update. Testing of the content using the built-in phone emulator as well as the new and yet-to-come Adobe Device Central.

The benefits of AJAX application were explained. Followed by the examples from the Spry Framework download. Then it was the demo that built a simple AJAX application that loaded various xml files and displayed the result in a sortable table.

The rest of the sessions presented by Flex Daddy Andrew Spaulding on Flex are being recorded and will also be online soon!